Today we look at the physiology underlying HIIT training with the aim of finding out the secret of why HIIT appears superior to many other training distributions.

HIT stands for High Intensity Training or “HIIT” once you add intervals. As long as you can tolerate it, there is fairly good evidence that high volume HIIT produces greater gains (eg high peak power, higher VO2max peak, higher FTP) than low-volume HIIT. And a training regime that includes higher amounts of HIIT is more likely to improve VO2max, neuromuscular power, anaerobic power and possible aerobic/endurance than the same time spent training at low intensity (base) or even middle intensity (threshold). So HIIT is highly effective especially in the short term….

The question for today is how does HIIT work? Why is it more effective than threshold/sweetspot or base (low intensity) work? 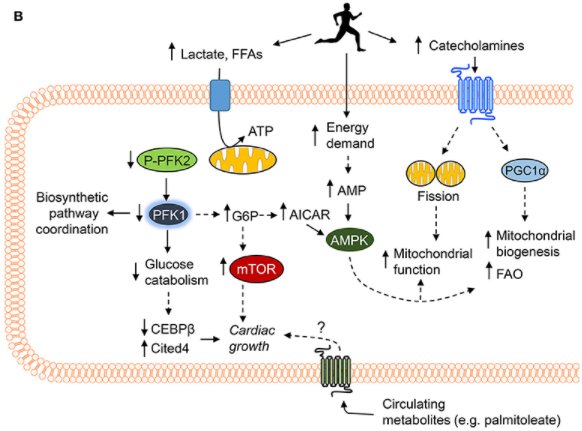 Cardiovascular adaptations are not unique to HIIT at all, but may be superior to those of continuous endurance training (according to Helgerud et al., 2007; Wisløff, , & Kemi, 2009) at least in short term studies. That makes sense, HIIT is a stronger stimulus. For example, the magnitude of cardiomyocyte hypertrophy depends on the intensity of exercise and in one study HIT induced a substantially larger response than moderate intensity: specifically 14% versus 5% longer cells(ref).

Helgerud et al. [18] found a HIIT protocol conducted for eight weeks was more effective than performing the same total work in a continuous manner at lower intensities for improving VO2max, and this corresponded to an increase in stroke volume. Remember that stroke volume changes more than HRmax in response to training.

Recruitment of “inefficient” fast‐twitch fibers may also contribute to benefits due to the high levels of type II fiber recruitment in sprint training (SIT), subsequently leading to greater fatigue and metabolic disturbances associated with the increased ATP and/or O2 cost of exercise.(ref)

There is also the research on EPOC (Excess Post-exercise Oxygen Consumption). For a review see this link (link)

Various studies find higher EPOC with HIIT training as compared to continuous aerobic training (ref) with only a couple reporting no differences. Research to date suggests small differences in EPOC post‐HIIT compared to MICT in the immediate (<1 hour) recovery period, but greater EPOC values post‐HIIT when examined over 24 hours and more gains with sprint intervals (SIT than HIT or MICT)

The mitochondrion is the main organelle for energy production through the generation of adenosine triphosphate (ATP) via the electron transport system (ETS), using substrates generated in the tricarboxylic acid (TCA) cycle.

More recent studies have begun to directly address the importance of exercise intensity versus volume in relation to mitochondrial content and function. Granata and colleagues (2016b) used three exercise protocols (LSD, HIIT, and SIT), matching volume in the traditional and HIIT groups, on young moderately trained men. After 4 wk of training, the investigators observed a 25% increase in maximal mitochondrial respiration only in the SIT group, with no changes seen in either the LSD or HIIT groups. The increased level of mitochondrial respiration within the SIT group was accompanied by changes in PGC-1α, p53, and PHF20 protein content. PHF20 is important for both stabilizing and up-regulating p53, whereas p53 is a tumor suppressor and involved in the regulation of mitochondrial function.

In contrast to the Granata study, HIIT alone has been shown to influence mitochondrial content and respiration (Daussin et al. 2008; Jacobs et al. 2013b). Jacobs et al. (2013b) observed increased mitochondrial respiration along with alterations in content (measured by cytochrome c oxidase [COX] activity) culminating in increased exercise capacity after only 2 wk of HIIT training.

Wait what about Exercise Volume?!

When the intensity of training is maintained and only the volume manipulated, mitochondrial adaptation does occur of course but it appears to be slightly different.

In many cases, training induces mitochondrial enlargement rather than biogenesis (see link).

Then, following 2 wk of decreased training volume, mitochondrial-specific respiration remained high, with a slight decrease in CS activity being the only sign of detraining.

In one interesting study when training volume was matched between groups, one study has reported greater increases in CS activity following HIIT versus MICT (39 vs. 11%; respectively, P < 0.05) (MacInnis et al. 2017) (ref)

To simplify, these studies suggest that high-intensity training is more important for increasing mitochondrial activity, whereas a greater training volume is needed to increase mitochondrial mass (see figure below) (MacInnis et al. 2016).

Classically, PGC-1α has been anointed as the “master regulator of mitochondrial biogenesis” and a fundamental component of exercise-induced adaptations with endurance training (Baar et al. 2002; Pilegaard et al. 2003; Little et al. 2010a). In recent years, another protein, p53, has emerged as a further role for this protein in controlling mitochondrial content

Granata and colleagues showed that p53 increases with maximal sprint training, whereas HIIT or continuous endurance training has no effect on p53 content (Granata et al. 2016b).

Lastly, an upregulation of hypoxia inducible factor 1 alpha subunit (HIF‐1α) has been demonstrated in human skeletal muscle during recovery from a single exercise bout of HIIT.

A Meta-analysis of Benefits

Rosenblat and colleagues (2022) recently looked at how interval training affects physiology. They examined 32x studies (369 participants) on both HIIT (n = 18) and SIT (n = 17) interventions. There was low sample size in inactive people and in athletes but the result in active (non-athletes) was intriguing in terms of pre-post training change (delta). 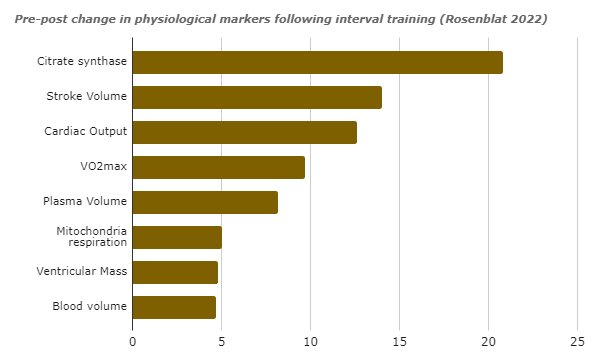 Interestingly, HIIT had larger effects than SIT. Further, there were significant effects on capillary density and VO2max in athletes

HIT (especially HIIT) is generally more effective in the same training time (but it is significantly harder) than steady-state training.

HIIT is important for increasing mitochondrial activity, whereas a greater training volume is needed to increase mitochondrial mass

HIT usually means a lot of intervals but the typical in a balanced plan where the TID is 50:15:35 this is not 100% intervals that would be crazy!

There is a down-side that in the long-term, high amounts of HIIT can risk overtraining and burnout, which is why POLARIZED combines HIT with base/endurance

Adaptations to Endurance and Strength Training

This is part two in our HIT series. Part 1 is here  and Part 3 is coming soon