Carbohydrates in their base form glucose or glycogen (in the muscles) can be turned into ATP very quickly but you only get 2 molecules of ATP per glucose molecule. Therefore you need a lot of Glucose to power explosive exercise. Fat on the other hand delivers around 18 times the ATP per fat molecule making it a much more dense source of energy but its slow, and therefore it is thought fat is only good for endurance. Whilst it is true that fat oxidation is important for longer events and fat oxidation capacity has been correlated with performance in Ironman triathlons (Frandsen et al., 2017) there are many misunderstandings about fat use and exercise. And when people talk about fat oxidation they tend to talk about only one thing: “FatMax” as if that’s all that matters.

Fatmax is the % of V02 max when you are burning most proportion of fat relative to carbs. It is not absolute level of fuel use nor the % of fuel use, it is an intensity measure. A better expression is simply the maximal rate of fat oxidation (aka MFO). Most people talk about FatMax when they really mean MFO.

Fat max became attractive because it supports the idea that if you find a certain *low* intensity then you will “burn most fat from body stores”.

Fact #1: Intensity is only one factor in fat oxidation

But why focus just on intensity? Intensity and duration is intimately related in human performance.

Schwindling et al. (2014) had trained cyclists perform step Fatmax tests, and then 1-h constant-load tests at Fatmax. Short-duration Fatmax tests did not seem to be reflective prolonged exercise. In fact if you ask athletes to exercise at their critical power duration is the key factor. 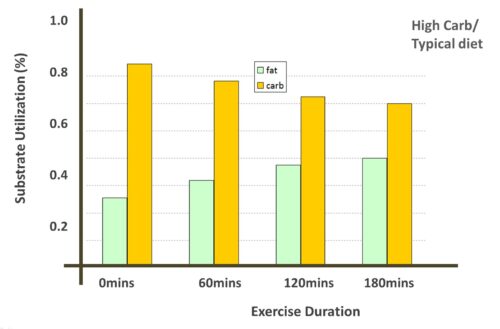 This is because it is impossible to exercise above critical power intensity (for that max duration eg 80% of VO2 max for longer than 1 or 2 hours). This table shows how duration AND intensity affect fatmax and totalFat burn. Because all human beings are intensity limited, intensity falls with rise in duration.

In reality, when measured side-by-side, even at 90% intensity, there is *some* contribution from Fat Oxidation. In fact most charts and studies are hypothetical at extreme intensities (extrapolated from a graph). Here is one with what looks like real data. Plus there are various sources of fats/free fatty acids (see below).

In all exercising mammals, all the carbohydrates (CHO) and lipids come either from the circulation (plasma glucose and plasma nonesterified fatty acids :NEFA) or from intramuscular reserves (muscle glycogen and muscle triacylglycerol (TAG), and muscle sources are used at high intensity. Sure enough at high intensity, fats ARE used and may actually be correlated with endurance performance:

Suppose a moderately fit runner runs 10k and believes they can burn more by running slowly in the “fatmax zone” . They slow to a half-marathon pace = let say 400kcals per hour. At this intensity, fatMax goes up to 70% of their energy from fat — i.e. they burn 280kcals of fat.

But now supposing our runner runs “tempo” at an intensity to a calorie burn rate of 600kcals per hour. At this higher intensity, the proportion of calories derived from fat might drop to 50%. However, the actual number of fat calories burned by our runner rises to 50% of 600 — i.e. a total of 300kcals per hour around 25% more than at the lower intensity!

Substrate oxidation (carb and fat burning) is estimated using gas exchange measurements (indirect calorimetry). The CO2 you exhale relative to the O2 you take in (VCO2/VO2) is the RQ (respiratory quotient), or RER (respiratory exchange ratio) and then if that ratio number reads 0.70, it tells us you are burning pure fat. When it reads 1.00, it tells us we are burning pure carbohydrate

BUT recently it was discovered that above threshold at high intensity, when lactate accumulation in the contracting muscle moves into the blood and increases the acid content [H+], which is buffered predominantly by the main buffer in your blood, bicarbonate [HCO3-] then this causes an excess (of non-oxidative) CO2 which should ben added to the total VCO2, making the VCO2 amount larger than it would have been had the acid not been added to the mix. This is not my theory it is the observation here  Basically at high intensities researchers think have been overestimating carbohydrate and underestimating fat uses!

Fact #7: Carbs AND fats are utilized at high intensities

The fat oxidation, at those high exercise intensities, was nearly 3 times greater in the well-trained runners compared to the recreationally trained (right and above figures). It wasn’t zero, or negligible, as we are often told, but in fact accounted for 33% of the total energy expenditure in the well-trained guys over all high-intensity intervals. 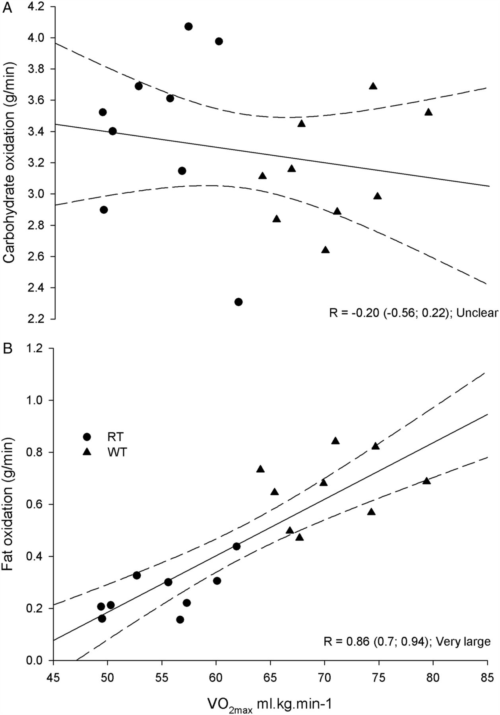 Aslankeser and Balc [ref] observed 17 times higher fat oxidation in an athlete group compared to an untrained group during high-intensity intermittent exercise (80% VO2max), while carbohydrate oxidation rate was the same in trained and untrained subjects. Fat contribution to energy expenditure was significantly higher in the athlete group (∼25%) than in the untrained group (∼2%) suggesting a major effect of training is to utilize fats during HIT as well as endurance. 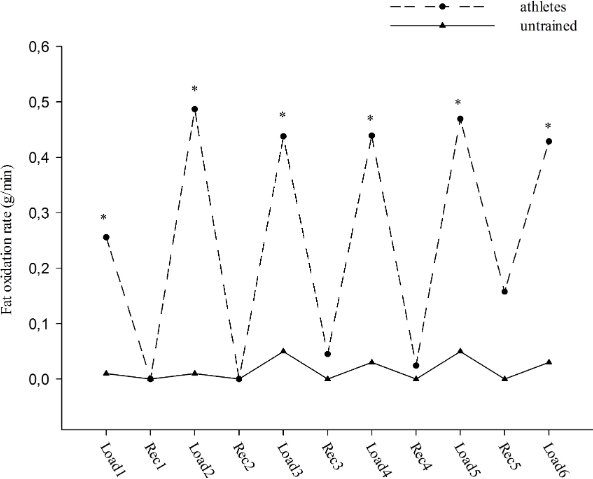 Training status appears to have little influence on the origin of fatty acids during the first 120 min of submaximal exercise. Nonetheless, trained subjects are able to maintain higher workloads with decreased metabolic work (HR) for longer periods compared to untrained individuals based on the ability to maintain FAox for longer durations [ref]. Despite the training status effect on fat oxidation, exercise duration will dictate substrate origin during submaximal exercise, and all exercise could be called “submaximal” in long efforts.

Studies comparing high carb and low carb diets show a significant affect on fat oxidation but fatmax stays more of less the same. Take a look at this curve 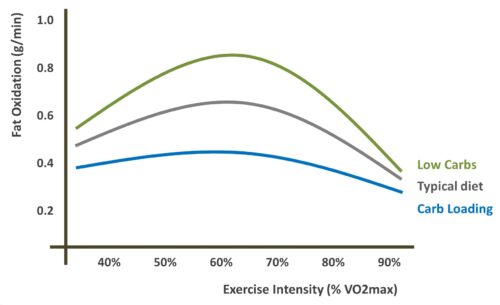 Now let’s look at diet vs fuel use by duration. 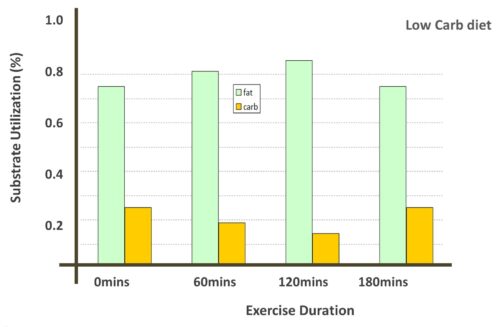 Fatmax as a % of VO2 is a fairly useless statistic on its own. Absolute fat oxidation(g/min) is more useful. And here is the proof. Frandsen (link) examined the final predictors of cycling performance in Ironman,

Remember if you target on ‘fat max fat burning zone’ purely as a relative % then exercises will be low intensity AND low duration. Anything long term will burn more fat and more calories and cumulatively this adds up to fat loss.

Fat loss does not depend on fat burned in any one exercise but the cumulative the calorie deficit that is created over the days, weeks and month

If you want to target weight loss…. please forget about FatMax.

The Regulation of Fat Metabolism during Aerobic Exercise