During WWI and WWII rationing was compulsory in many countries and consisted of a balanced and calorie restricted diet of around 2300 calories (the average teen in the US eats more than this now). Meat, cheese, butter, cooking fats and sugar were restricted and people ate a diet higher in carbohydrates and lower in fats (War diet: 32% fat, 55% carbs 13% protein). From 1911 to 1921 and from 1940 to 1951, life expectancy increased by about six years (more than double the rise in other decades). A 20% calorie restriction contributed to a 30% death rate reduction compared to pre-war times (Strøm et al, 1951). Less convincing but still of note: inhabitants of Okinawa were noted to have one of the longest lifespans in the world yet naturally consumed up to 17% less calories than the rest of Japan (a benefit sadly lost due to Westernization of diet). In a two year human captivity Biosphere 2 experiment crew members remained in excellent health and sustained a high level of physical and mental activity throughout on just 1700 calories. What about actual trials? This is tricky due to the long time needed but there is a two year trial of caloric restriction in humans published in 2019 called CALERIE : calorie restriction of 12% had better readings for cholesterol, blood pressure, insulin sensitivity, and measures of inflammation like C-reactive protein….although mortality was not (yet) studied. Doh.

What is Caloric Restriction?

Yet in 1935 McCay found that caloric restriction increased average rat lifespan from 483 days to 894 days. The usual reduction in calories is around 20–50% (10–25% in humans) …..which is a lot but short of causing malnutrition.

Follow-ups studies show that this the effect holds in most mammals including rhesus monkeys and humans….so is it time to reduce those portion sizes? You could try…..

But let’s first dig into the data…….

How Does Caloric Restriction Work?

Is it a direct effect or does it (simply) reduce comorbidities such as heart disease and cancer? Maybe both. Restriction seems to help obesity, CVDs, cancer incidence, and type 2 diabetes, among others (Longo et al, 2021) (Green et al, 2021)

Single-gene mutations targeting key nutrient-sensing pathways were discovered to extend lifespans of nematode worms, were discovered (link). Since then, many more mutations that affect longevity have been found in knockout and transgenic mouse models. Methylation drift has been observed in monkeys improving their biological age by 7 years (link)

When studied separately decreased protein (including methionine, branched-chain amino acids) might trump decreases in glucose/carbs and fats. Why? because in some studies focussed protein restriction and particularly methionine restriction, but not carbohydrate or lipid restriction, increases maximum longevity in rodents (Sanchez-Roman and Barja, 2013)

Decreased levels of methionine affect the metabolite S-adenosylmethionine (SAM). This can alter DNA and histone methylation.

What are the Physiological benefits of Caloric Restriction in Humans?

There are many possible, but a study (CALERIE™) by Waziry (2021) found CR slowed biological aging in humans using DNA methylation analysis in 197 non-obese people

(however results may have been confounded by weight loss) 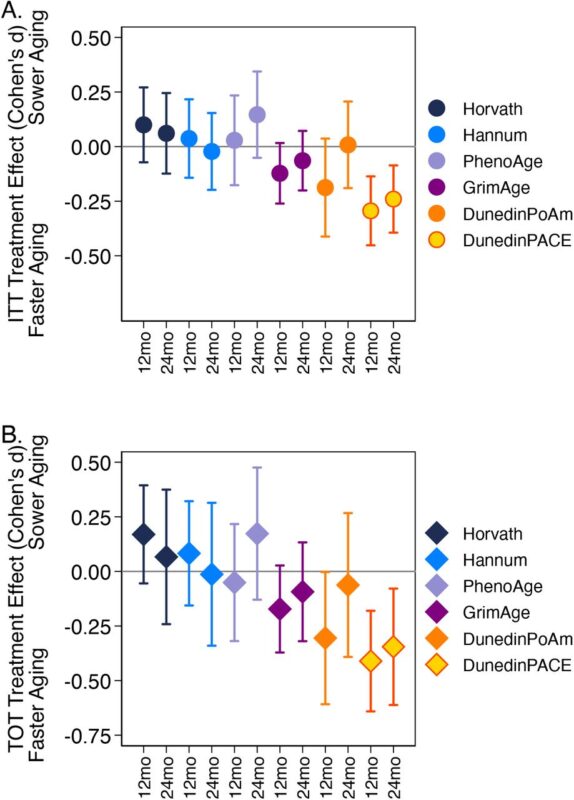 But is Obesity the Key?

No doubt CR reduces obesity but what if the effects of CR are mediated simply by weight loss?

For example, mice caught from the wild have 3–4% body fat but mice in captivity have 10-22% body fat. All studies are conducted in calorically restricted laboratory mice which weigh actually significantly more than wild mice and have far higher body fat levels.

When weight gain during adulthood is measured as the area under the weight curve, the magnitude of life span extension afforded by CR is beautifully correlated to the weight gain in control mice fed ad lib. AUC is calculated as the average amount overweight multiplied by the period in months spent overweight. Could this be applied to humans?

Unfortunately there is little good evidence in humans. One modelling study found voluntary caloric restriction in humans increased life span by 8.4 years in men and 6.1 years in women when started at between 20 and 39 years of life (Grover et al., 2015). The caveat is that these improvements are only achieved against a control group of humans with a BMI above 35 (Grover et al., 2015).

But in the elderly, low weight is a significant risk, in fact (within the healthy range), a slight increase in BMI with age improves survival over staying skinny throughout life (Zheng et al., 2021).

Calorie restriction almost certainly works for anyone who is overweight, but is this really news? Ideally it will prolong not just survival but disease-free and disability-free survival (figure).

But until there is a good study showing this works independently of changes in body weight then it is the same finding as showing that obesity is linked with accelerated mortality (and worse disease-free survival).

In other words the best way to think about it is CR simply reverses shortened survival associated with obesity rather than prolonging survival per se.

The final caveat is that it is tricky to do CR whilst maintaining a healthy mind and body (without losing fat-free mass). If you have found the trick for this, let me know!

[ACC] Does Calorie Restriction Slow Aging?
About the Authors: Adrian Liberman is currently a PhD student in biology at a university in the mid-Atlantic. He…slatestarcodex.com
Rodent diet aids and the fallacy of caloric restriction – PubMed
Understanding the molecular mechanisms of normal aging is a prerequisite to significantly improving human health span…pubmed.ncbi.nlm.nih.gov
Caloric Restriction and the Aging Process: A Critique 5/15pm/2014
The main objective of this review is to provide an appraisal of the current status of the relationship between energy…www.ncbi.nlm.nih.gov
Molecular mechanisms of dietary restriction promoting health and longevity – PubMed
Dietary restriction with adequate nutrition is the gold standard for delaying ageing and extending healthspan and…pubmed.ncbi.nlm.nih.gov