Following our recent video (link) on muscle fibre myths, I got this question

“I am curious, does fat guy tend to have higher vo2max, because their body adapted to needs of more oxygen? Any is a 70kg rider going to have a higher or lower FTP than a 90kg (like-for-like)? I have several friends who are overweight but became so strong after losing weight from cycling”

This is a tricky question which depends on how closely you want to look. First, I am going to apologise, but I am going to treat FTP and VO2 max as the same due to lack of data about FTP specifically. At the population level a high body weight is generally related to a higher fat mass which is pretty closely linked with lack of fitness (and a bad diet). Sure, there are rare medical causes of obesity but in 99% its caused by long term unhealthy lifestyle. So it is no surprise that in the population high body weight is related to a low Vo2max and indeed a low fitness score on just about any metric. But heavier bigger athletes *are* generally stronger, and in an analysis only 5% of overall gym strength was found to be explained by body weight.

That said, not everyone with a higher than average body weight is unfit or “overweight”. There is a strong correlation between overall body mass and body fat but its approximate (figure). Indeed this has been the foundation of the criticism of body mass index (BMI) for years….specifically you can be big and strong and lean and have a higher than advised BMI! This could be one reason a slightly high BMI is not necessarily a mortality risk (link).

Is the BMI Formula Correct?

An interesting aside is that the BMI formula (wt/ht²) is actually proven to be wrong! If you plot normal population data of weight vs height then you find the correct formula is more like wt/ht².⁴⁵ (ie raised to 2.45). Apparently even Quetlet’s data showed this (link). This means wt/ht² will classify people as overweight or underweight simply because they are significantly taller or shorter than the average human. Romero-Corral et al tested this and found that the “>30” kg/m² BMI benchmark for obesity is mostly accurate when it is position (PPV of 87% for men and 99% for women) but horribly inaccurate when negative (NPV was 60% for men and 54% for women). In short, 50% of the population are misidentified by the BMI-defined threshold for obesity mainly by saying they are ok, when they are not.

What does this mean for athletes? Some sports are very weight sensitive, particularly long distance running and hill climbers in cycling. However, power sports less so, and even rowing where your weight is essentially supported by the water doesn’t require a light mass to do well provided power is high.

If you sort professional runners, who are after all supporting their own weight, by event and then body weight you find a pretty strong trend to lower weight in longer events (source)

All-out sprinters tend to have a BMI of around 24, even if they are small like Caleb Ewan. Sprints at the end of more rolling courses are likely to be won by riders with a BMI of 22, such as Greipel, van Avermaet, Sagan, Gaviria, Groenewegen, Bennet and Kwiatkowski. Time trial specialists like Dennis and Thomas have similar physiques, though Dumoulin and Froome are significantly lighter and remarkably similar to each other.

GC contenders Roglic, Kruiswijk and Gorka Izagirre are near the centre of the distribution with a BMI around 21, close to Viviani, who is unusually light for a sprinter. Pinot, Valverde, Dan Martin, the Yates brothers and Pozzovivo appear to be light for their heights. Interestingly climbers such as Quintana, Uran, Alaphilippe, Carapaz and Richie Porte all have a BMI of around 21, whereas Lopez is a bit heavier.

Runningshoesguru (link) has made an ideal racing weight calculator eg 10 pounds over your ideal racing weight then you could potentially cost 20 seconds off your time. Since VO2max is closely related to running speed then it is a safe bet that VO2 max is related the (low) body weight providing muscle mass and body density isn’t compromised.

If you want to look at functional fitness and not just endurance then look at cross-fit. If you take the massive cross-fit community and make a composite of fitness shown here (mostly weight lifting but largely functional fitness)

……then fitness is related to a high BMI (up to a point). It is discussed here (link)

This means that unless you are looking at the general population it is best to look at body composition not just raw weight. You can isolate this by differentiating raw weight from lean body mass. Basically separate fat and muscle……. 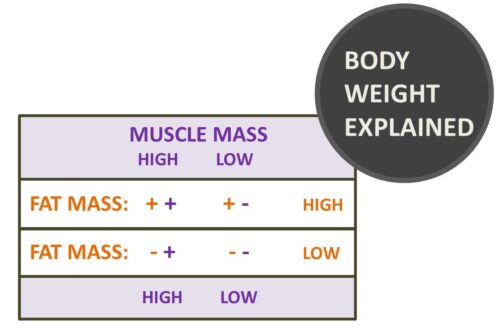 You can estimate LBM here ( https://www.calculator.net/lean-body-mass-calculator.html) but this is a guestimate because the calculator does not ask about calories or exercise. A better version is here ( https://www.omnicalculator.com/health/bmr-katch-mcardle#what-is-the-katch-mcardle-formula) Therefore the gold standard is to measure it directly using: Skinfold Thickness Measurements (calipers) | Underwater Weighing | Bioelectrical Impedance |Dual-energy X-ray Absorptiometry (DXA) | Isotope Dilution

Once you re-plot VO2 max against LBM you find its highly correlated (r = approx 0.8)

A paper from Mondal & Mishra tested 54 young adults on a treadmill and found BMI had a weak negative correlation (r= -0.3232, p=0.0171) with VO2max but Body Fat% showed strong negative correlation (r= -0.7505, p<0.001) with VO2max (fig5) . In cycling (especially indoors) the relationship is still there, but a little weaker if measured against peak power.

So what happens if you control for weight by using VO2max/kg or watts/kg, in that case you are measuring fitness and (endurance) fitness itself tends to be higher in leaner lighter individuals. Alex Hutchinson suggested that VO2max is a combined measure of two different traits: how fit you are (i.e. VO2max divided by lean mass) and how fat you are (i.e. fat mass). Several studies demonstrate that overweight persons have similar VO2max values relative to LBM

These finding show that body composition is more important than just weight in determining performance. A lower body fat% predicts and a higher lean muscle mass independently affect performance. Looked at simplistically, excess body fat is a marker of keeping your body in anabolic “storage mode” and this is usually a marker of poor cardiovascular and strength fitness. Low muscle mass is indicative of a poverty of strenuous activity and hence this is also a marker of poor muscular fitness. The ideal, for optimal health, is to build up functional lean muscle mass by exercising regularly AND keep your fat mass low by eating sensibly.

However remember no matter what your current fitness or muscle mass or body fat, you can always *improve with training* so don’t let any of these findings deter you from your personal goals. There is never a better time to start to train, than today. 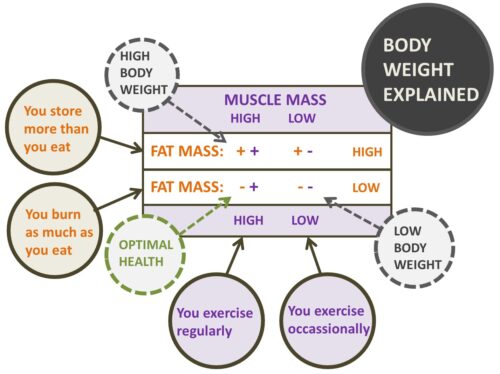