This was a question from the zwift forum. A watt is a watt isn’t it? Yes true. So what’s the difference between 250w climbing and 250w on the flat? Some people will say no difference, but consider this. Swim the same effort in the pool or same effort in the sea is there a difference? Yes, the environment shapes the nature of the effort. So let’s clarify 10 changes that differ when climbing vs the riding on the flat (like in a flat timetrial).

In general when climbing people are going uphill at altitude, and when riding on the flat most people are riding at sea level. Riding at altitude means (in general) low temperature, low air pressure, low oxygen saturation…so aero drag is lower but the effort itself feels harder because of the oxygen availability. OK for the purposes of this discussion lets leave altitude aside.

When climbing you have the additional effect of overcoming gravity, so you are riding slower at the same effort compared to riding on the flat. This means that when climbing:

Cadence might go up or down or stay the same when climbing depending on the rider. BUT in this example we said power stays the same. Since cadence is:

then if power stays the same, the torque on the pedals (put simply the “push” on the downstroke goes up) then cadence must fall. So cadence usually falls when climbing at the same power as you went on the flat.

When riding on the flat @ 40kph you are propelling your mass relatively fast, so your kinetic energy and momentum is high.

This means it takes more energy to slow you than when you are going slow. In addition the total resistive forces acting on you on the flat are mostly (75%) aero drag ….and aero drag force is a function of speed squared, as in….

Power loss due to drag force is

if you slow a little bit on the flat it gets dramatically easier.

When you are climbing @22kph at 2% grade drag forces due to gravity increases to around 60%.

When you are climbing @14kph at 6% grade drag forces due to gravity rapidly escalate to around 90%.

Resistive forces due to gravity are

F = mass x slope x a constant, and given your mass and slope (at any moment) is also constant, then…..

Now compare the resistive forces on the flat (#5) vs climbing (#6) and you find a big difference. Y axis is the watts “holding you back.

When you try and go faster on the flat you rapidly “hit a wall” of aero drag….imagine a marble on a curvilinear slope.

When you try and go faster on the flat its easier to speed up *slightly* but from a slow starting speed. Imagine a marble on a relatively flat uphill slope.

Now n reverse……when you stop trying to go forward on the flat, you slow down slowly because A. the resistive forces give up easily and B. your momentum and kinetic energy is high.

When you stop trying to go forward (& up!) on a climb you slow down quickly because A. the resistive forces are more linear and B. your momentum and kinetic energy is low.

So speed oscillates a lot when cycling uphill compared to cycling on the flat and uphill, especially on steep grades you are constantly fighting not to slow to a stop.

Also a footnote the less powerful the rider, the lower the watts and the more the oscillation in speed when climbing……to the point when you almost come to a stop and simply fall off or have to put your foot down!

When you are fighting resistive forces with a tendency to slow (sometimes dramatically!) then it tends to cause you to alter your pedal dynamics basically to A. maximise power and B. avoid “dead spots” in power in the pedal 360. To maximise power you either increase cadence or torque or both……more often in short hard climbs riders increase torque and their pedal dynamics become more “peaked” and less smooth compared with the flat. However on long climbs riders tend to increase their cadence (avoiding muscle fatigue) spinning up the hill. 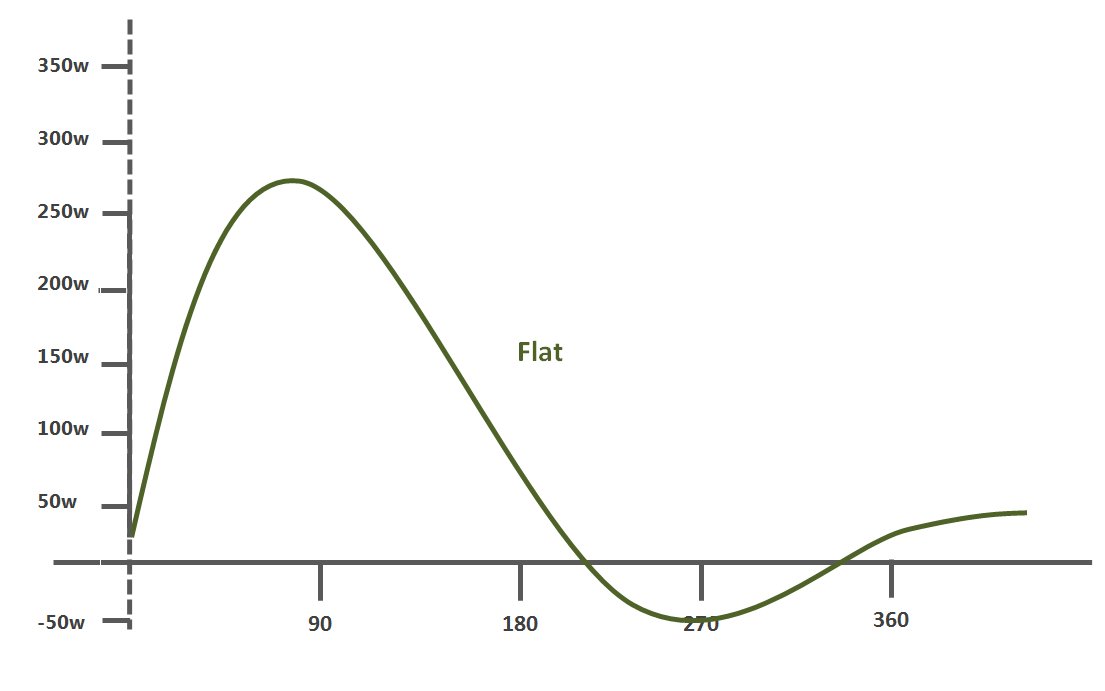 Typical pedal forces on the flat 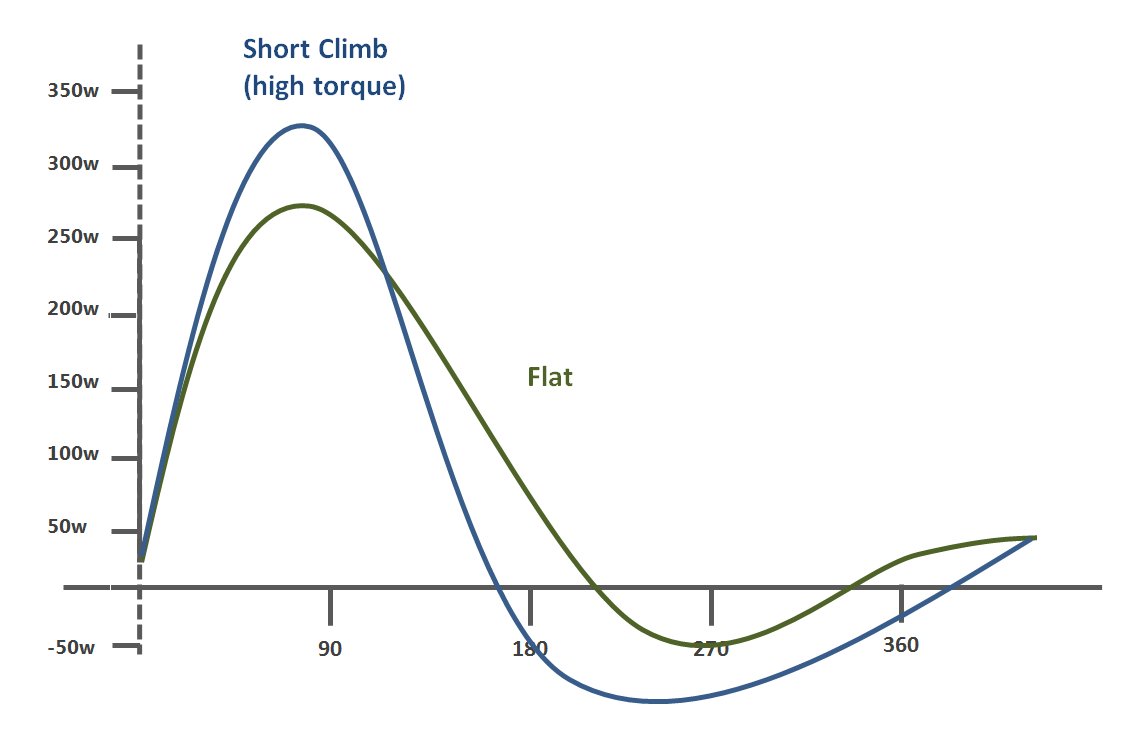 On short sharp climbs, riders tend to power over it with high torque, pushing hard 30-110deg 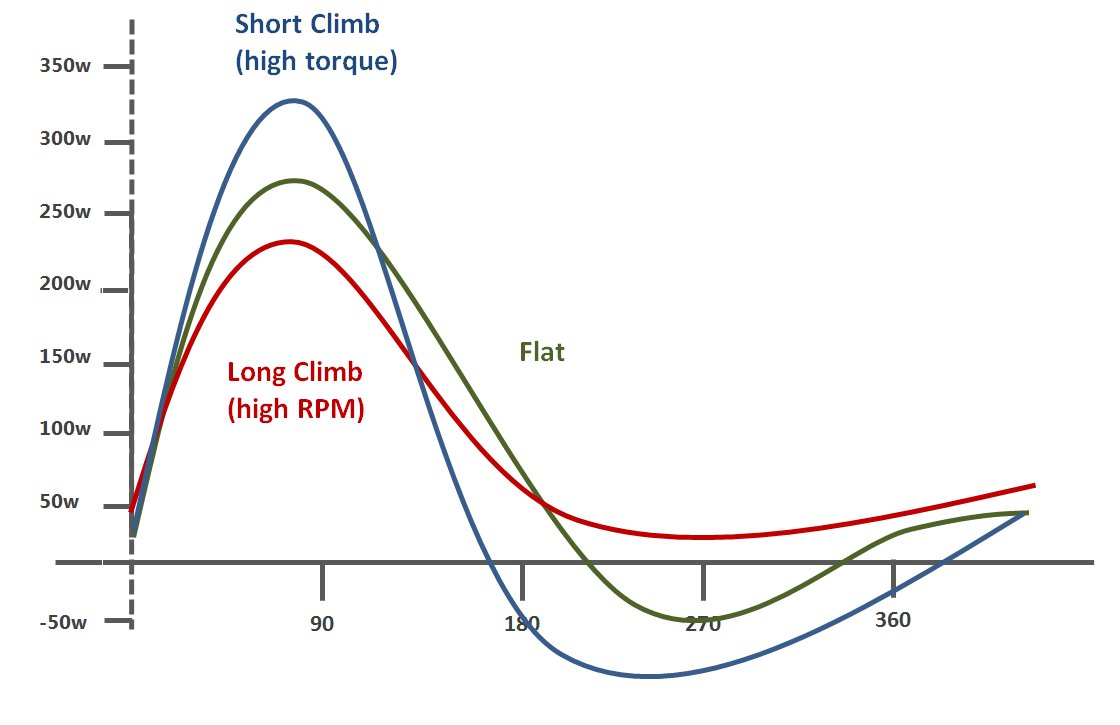 On long climbs riders usually settle into a rhythm of smooth high cadence, pulling a little in the “deadspot” and “upstroke”

In everyday terms smash it with torque on short sharp climbs and “spin it” to win-it on long steady climbs!

Some riders can maintain their form over the climbs, but most will lean forward and often adopting a standing position. Standing makes the pedal dynamics even more peaked and less smooth, which again works best on short sharp climbs.

When climbing the hip angle (α), shoulder angle (β), and elbow angle (γ) are all typically compressed (smaller). The position on the saddle is often shifted forward and the back is more rounded so the centre of gravity to shifted forward so there is sometimes less weight on the rear, causing the rear wheel to slip on steep climbs with low traction.

10. Climbing Indoors on the Turbo

Finally, lets address which of these factors apply when “climbing” indoors.

Obviously, altitude and gravity do not apply. Most people also “climb” without a riser block (or wahoo climb) but if you do, then posture differences would apply…..but mostly not.

Speed effects can only apply to the extent their are accurately simulated in the software. So does Zwift have complex modelling of sped oscillation according to the factors above? I don’t know but I doubt it.

The main difference is that the turbo trainer simulates the grade of the hill by applying more electromechanical resistive force. Basically its harder to maintain speed when your turbo apples the brakes (going uphill). You can turn down this effect in zwift…its called the “difficulty” and it is the degree to which resistance is added when a slope is on screen.

In general if the trainer has a high resistive force then you will slow quickly and if in the case of a mechanical dumb trainer if the flywheel is *small* then it will simulate a hill effect when you push and dont push on a hill. In the case of a smart trainer if the electromechanical braking is applied in proportion to the real life effect then again it will simulate climbing to some extent. Whether it is entirely realistic is doubtful, as the outdoor conditions are too variable, BUT you will get a reasonable uphill training experience.

~75% of the resistive forces on the flat are aero-drag which rise exponentially meaning effectively you ‘hit a wall’ in terms of going faster but once you slow, you will tend to keep going on the flat…..this is essentially why w/cda is important in flat timetrials

~90% of the resistive forces climbing at 6% @250w are gravity related which rise linearly (not exponentially) meaning it is really easy to go a little faster but forces are always trying to slow down even at slow speed…..added to which you are already likely going pretty slowly! This is why w/kg is important in uphill events

All of this means your pedal dynamics become different when climbing resulting in a slightly different muscle usage, and a different type of fatigue.

Whilst some prefer climbing and some prefer time trialling it depends what you trained for; so you need to training with climb or flat specificity.

In a sentence: train to be a good climber as well as good on the flat (and visa versa).